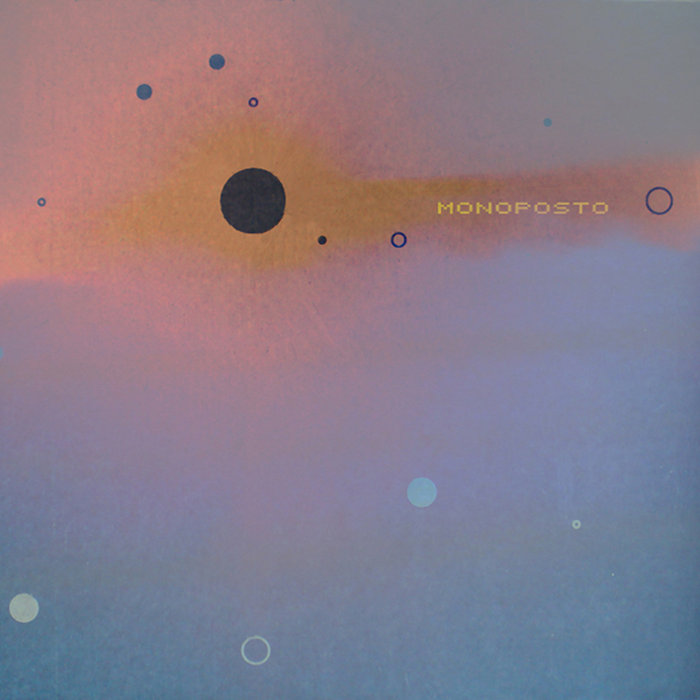 The flavor of this upcoming album is an abstract but balanced mixture of deep and rich textures where the sound and emotional content varies according to what you choose to pay attention to. Tune your mood plateau for a trip from a Boards of Canada-ish atmosphere to a Laurent Garnier alike downbeat osmosis and back. Or forget what you just read, and have a closer look at Monoposto’s introduction of ’Monoposto’:


Hello, itʼs been a while!
Long before attempting to start a music career, which in the mid 2000s seemed an obligatory choice if you were into electronic music, ('Be a DJ! Cash in! Look at that guy, he played Japan last month!'), the idea of making music and exploring sound was never bound to an immediate economic return.
While the dream of becoming rich and travel the world was often discussed until the late hours, while getting stoned with my music buddy, (after all, we learned the craft while listening to the Chemical Brothers, Boards of Canada, the Orb and zillions of other creative duos, emerged from the bedroom studio era), we would start a music project from a sudden inspiration and a random sound, we went any direction our AKAI S2000 brought us, without fearing to be difficult for the market, not fitting to club bookings, not fitting to a certain label due to sound choices. This gives an aura of magic to my late teenage years, naïveté which is long gone and possibly never will come back...
The music of the places and spaces I was moving into, the emotional field recordings which took place during my university years at the beginning of the Millennium in Bologna ... this was a long time before these incubated dreams would take shape into music. These images persisted imprinted deep in my soul and hibernated once I got tempted by quick success. They derailed towards an beat that was easy to produce-consume-and-sell four to the floor beat: most of my efforts, once relocated to Berlin, were spent in maintaining myself through a stream of more or less satisfactory gigs in the international Club circuit clubs. My emotions had to be squeezed in-between a tight series of kick drum and hi hat patterns, hiding incognito behind a facade of minimalistic dance music and epic reverb drops. I remember being constantly embarrassed and apologetic for using melodies and chord changes, for listening to jazz and fusion.
That approach was of course nor healthy nor sustainable: the conjunction of a major economic global crisis, music distributors collapsing, boredom in clubs and its increasing touristic crowds, were enough to put many such careers to a halt due to lack of motivation, excitement and economic return.
2008 was a year of change for many, and over the following years silence seemed to me the perfect reaction to what was happening in the music scene
that I used to flirt with: it wasn't so much a consequence of drying up, it was more like ʻletʼs see if my ideas, instead of being instantly pushed out in real time, can become stronger and lead to something 'dense' with timeʼ.
5 years later, the silence was broken. Music flew like water during the summer of 2014 because of my newly found creativity with the bonus of having myself removed completely from the music business and its constraints: instruments became joyful toys again, which I partly build and modify myself. I sat in my living room, listened to the first bounces of these pieces and realized that this was the music I was listening to when I was 19. This was the music I was looking for. It was not a chimera. It is here now. 2017. And I am ready for people to hear it.